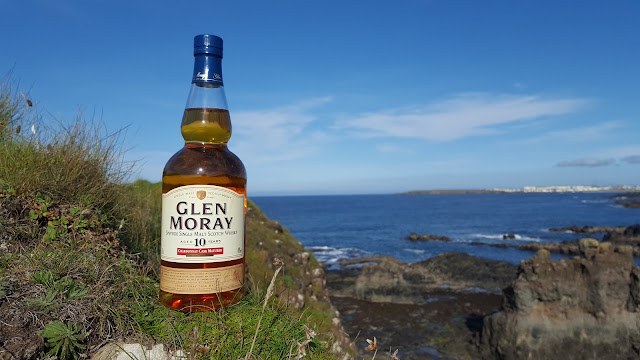 Glen Moray is probably only reasonably familiar here in Northern Ireland to shoppers in Sainsburys where you can find the Elgin Classic (stocked by Asda & Tesco too), Elgin Classic Peated and Elgin Classic Sherry Finish for between £20 & £22 pounds a bottle which for a single malt is pretty reasonable these days even without an age statement.


Glen Moray malt plays in large part in the Label 5 blend, apparently the 9th best selling Scotch whisky in the world and particularly loved in France (maybe unsurprisingly Glen Moray have been owned by a French company, La Martiniquaise since 2008). The single malt side of things is going pretty well too for Glen Moray with sales up by 15% making Glen Moray the fifth best selling single maly whisky in the UK. All this means that the distillery has seen some expansion and can produce 5.7 million litres of alcohol per year.

Most distilleries nowadays dabble in a little 'finishing' of their products. After an initial maturation in barrels that have usually held bourbon previously, the contents are decanted into another vessel that may have held sherry, port, madeira and now even stouts or IPA's. The finishing period can be anything up to 18mths to 2 years, after which you start getting into 'double maturation'.

Finishing was pioneered by David Stewart, Malt Master at The Balvenie and there are a number of reasons why distilleries like to use this method. Firstly, cost. Ex-bourbon barrels cost around £100 give or take a few pounds and they are plentiful due to US laws regarding the production of bourbon (the cask can only be used once!). Barrels that previously held fortified wines of any description are way more expensive, sherry butts can command upwards of £800 a barrel and wine barriques can cost even more, easily over £1000 a barrel. The cost implications are clear, full maturation of a spirit in an ex-wine or ex-fortified wine barrel can be an expensive business.

The second reason distilleries like to finish their products is for flavour. The rationale is that the finish can bring an extra layer of flavours to your product. For example a sherry finish on a bourbon matured whisky means that you should get notes of dried fruit, baking spices, nuts intertwined with vanilla, caramel and oak from the bourbon. If done well it can be a joyous thing. The more cynical of us may choose to believe it can also be used to try to mask substandard spirit cuts and poor cask selection!

So it is unusual to find a whisky that is fully matured in a wine cask and especially at this price point! This Glen Moray is fully matured in ex-chardonnay wine casks for at least 10 years. It is bottled at 40%, probably chill-filtered and no indication as to whether the dreaded caramel colouring has been added and it cost me £24.49 at shop4whisky although their has been a small price rise subsequently. But seriously, under £25 for a 10 year old single malt! I'd have been mad to pass it over. 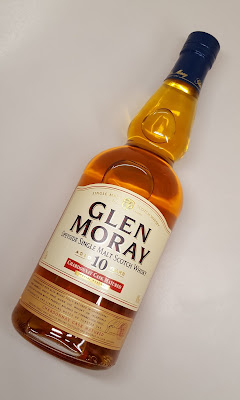 Initially very sweet, intense floral honey, butterscotch then fruity with grapes and pears the most evident before the oak tannins kick in with wood spice.

Its a well balanced dram where no one thing really dominates and the nose and the palate marry well. This is a well constructed whisky that is easy to drink and is enjoyable even though being relatively straight forward in flavour profile. At this price you really cannot expect much more and it puts a lot of bigger names (with subsequently higher prices), especially on the supermarket shelf, to shame.