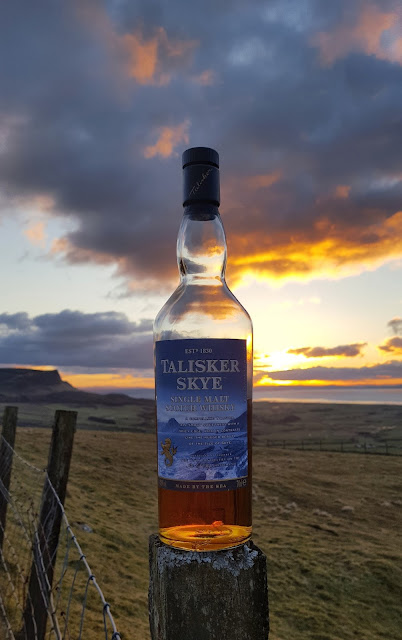 After the financial crash of 2007 whisky production essentially fell off the edge of a cliff, when people are short of cash luxuries like whisky tend to be low on the priority scale. This sudden decrease in production has now led to a shortage of aged stocks for many producers. This shortage of aged stock has also seen prices of anything with an age statement creep ever higher. For instance it wasn't that many years ago that the entry level malts such as Glenfiddich 12, Talisker 10, Balvenie 12 etc could easily be picked up between £25-27 a bottle. Now you will be fortunate to pick these up in your local bottle shop or supermarket for anything under £35, and if you do they will be on offer as a loss leader.

So stock management is one reason for the recent proliferation of NAS whiskies throughout the industry flooding our shelves. And to be fair to Talisker they have released the likes of the Skye to take the pressure off the classic Talisker 10 year old and to keep it on our shelves. The dilemma this poses for us the consumer, is that we are now paying prices for NAS whiskies that we had been paying for age statement whiskies previously - Glenlivet, I'm looking at you! For example the now defunct Glenlivet 12 year old sold for £32, its replacement, the abominable Founders Reserve (coloured new make) is £34!! I was never a huge fan of the 12 year old but paying more for a definite step down in quality is certainly a kick in the teeth for the consumer. Goodness knows what they would charge for the Nadurra 16 year old today! I know that age statements do not inherently mean that you will receive an outstanding experience but they are a helpful marker as to what you will be getting for you hard earned dosh.

In reality though, what this would seem to indicate for the future is that as we, as consumers, have been prepared to pay premium prices for whisky that gives us little indication about what is contained in the bottle other than marketing guff of viking legends and 'finest quality' oak barrels, when aged stocks become available again prices won't tumble down, rather anything with a number on the front of the bottle will continue to be priced at the higher end of the spectrum. In short, the glory days of cheap(ish) aged whisky are over.

Over to the Talisker Skye now - its NAS, coloured, chill filtered but positively it has been bottled at 45.8% abv. 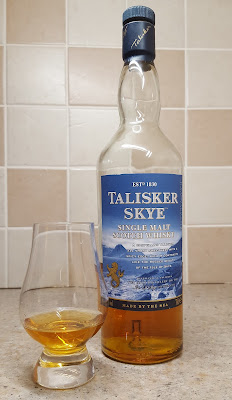 Young spirit is prominent developing into pears and apricots, toasted oak makes its presence felt with the classic Talisker brine and smoke only make fleeting appearances

Quite short and becomes fairly indistinct, hard to pull out particular flavours with cask char and caramel being the most obvious

Okay, I know that this is an expression that is supposedly softer than the Talisker 10 and is seen by Diageo as an entry point into peated whiskies. The question I have to ask is why bother? It retails for a price similar to the 10 year old without the quality. Whereas the 10 year old is memorable this is anything but. Its a perfectly drinkable whisky but rather dull and lifeless compared to the 10 year old and at the price of around £32-34 a bottle not one that I would recommend. Even when on offer at £25 in the supermarkets I think I would look elsewhere for a better experience. Another NAS whisky designed to sell units in supermarkets rather than build brand appreciation.﻿