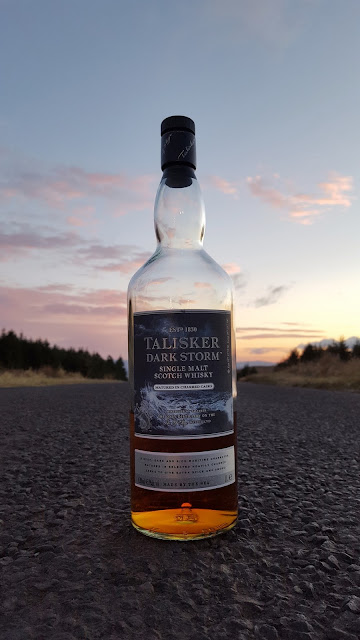 So it's off to the minefield of mediocrity that is Global Travel Retail with this review looking at Talisker's Dark Storm expression. My first foray into GTR was the ill-fated brush with Bowmore's abomination, Black Rock, a truly terrible dram and one that will never see the inside of my whisky bunker again. In fact I'd turn to drinking gin before I would let that stuff pass my lips again.

Talisker Dark Storm was released around June 2013, hot on the heels of Talisker's Storm expression released in February 2013. Steve White, Diageo marketing director for global travel and Middle East (GTME), said: “Talisker Dark Storm is… a single malt that captures the untamed spirit of a full-blown storm at sea. It is intense and powerfully flavoured, a whisky that offers an element of ‘rugged luxury’ to today’s travellers – adventurers and whisky connoisseurs alike." Powerful stuff indeed! Based on that description I'm ready to hurl myself into the North Atlantic during a force 10 gale just to recreate the experience that is waiting for me in my Glencairn glass.

On the accompanying box it proudly states 'Matured in Charred Casks'. For the uninitiated that could seem to herald a newly inspiring world of spice & oak, but to those who have been around the block this could indicate the use of tired casks rejuvenated by a fresh spell of flame on oak action. Either way Talisker themselves tell us that the 'Dark Storm' is their smokiest whisky yet. It is a no age statement whisky that looks like it has been liberally doused with e150 caramel and has almost certainly been chill-filtered. On the plus side it is bottled at a healthy 45.8% abv. On release it cost £42 for a litre bottle meaning if bottled in a 700ml standard bottle the price would be roughly £29.50. Doing a bit of online shopping research I have seen the price range from £49 to £70 from various online retailers today. 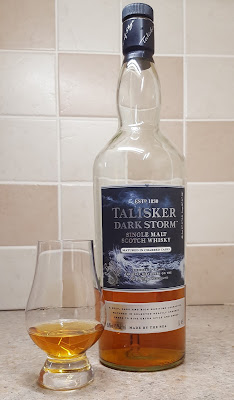 Considering the nose is fairly sweet, on the palate it is actually quite tart & bitter. Definite char notes, burnt toast, bitter cocoa, oak, tobacco ash & peat smoke. It is also a very thin feeling whisky in the mouth, not a lot of substance.

So GTR Round 2 follows on from Round 1 with another epic disappointment. This is a dram of little substance. Not quite as bad as the Bowmore Black Rock but not far off. It is one dimensional and bland and does not do the Talisker brand any justice at all. Where the Talisker 10 is a classic, complex, coastal giant....this is sadly a pale imitation of its bigger brother. The heavily charred casks used try to mask its youth but fail miserably. That's not to say youthful whisky is bad, it isn't! There are some cracking young whiskies out there from the likes of Kilchoman, Laphroaig Quarter Cask, and many various expressions from independent bottlers (check out the Carn Mor range for some cracking young whiskies). But these will have been treated to good quality casks. I just get the impression that this has not been the case in this instance and it has been very much to the detriment of the final product. It certainly does not offer 'the untamed spirit of a full-blown storm at sea' experience promised in the marketing blurb nor does it offer ‘rugged luxury’ by any stretch of the imagination.