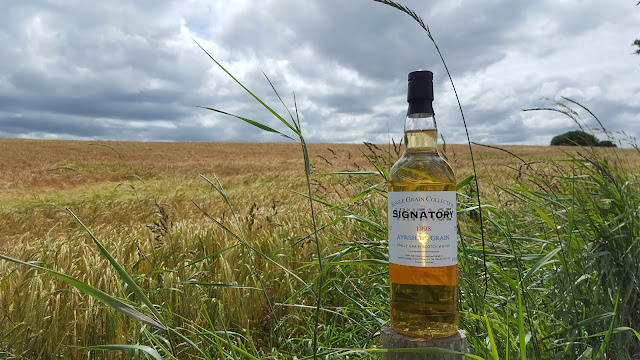 Grain whisky is very much the poor relation of the whisky world. It doesn't hold the kudos of its single malt and single potstill brethren, instead it is seen as a filler, used to bulk out the wide variety of blends produced throughout Scotland and Ireland. Although grain whisky can tend to be lighter and more delicate than either malt or potstill that does not mean it is less flavourful or inferior in quality. Grain whiskies tend to be cheaper than malts or potstill variants, but again this doesn't mean the product is lesser. Indeed grain whiskies have their own personality and can indeed by enjoyed in their own right. John Glaser of the Compass Box Whisky Company has said that 'the best grain whiskies, from great casks, are some of the silkiest, sweetest, most mouth-wateringly delicious whiskies in the world'.

Grain whisky in Scotland usually has unmalted wheat as the base grain, whereas in Ireland maize is the grain of choice. As these grains are cheaper than malted barley there is a cost saving straight away, although the mash bill will still contain around 10-15% malted barley to help the fermentation of the wash. The other significant cost saving comes from the use of Coffey/Patent/Continuous stills to produce the spirit as opposed to the traditional pot stills used for malt and potstill whisky. These stills can produce a much higher quantity of spirit over the same time frame than a pot still. One of the dividends of this for us, the whisky consumer, is that you can buy high age statement grain whiskies at a fraction of the price of their malt and potstill counterparts.

In Scotland at present there are seven working grain distilleries, Girvan (of which this Ayrshire Grain from Signatory comes from), Cameronbridge, North British, Strathclyde, Starlaw, Invergordon and The Loch Lomond Groups grain distillery in Alexandria, West Dunbartonshire. The different apparatus, mash bill, mash temperatures and fermentation time all lead to different flavour variations & spirit styles among these distilleries.

Grain whisky has been championed as a standalone style mainly by independent bottlers such as Signatory, Douglas Laing and the Scotch Malt Whisky Society (SMWS) but now the big players are also seeing the potential with William Grant & Sons (they of Glenfiddich & Balvenie fame) and Diageo releasing Single Grain whisky, Girvan and Haig Club respectively.

The Signatory Vintage Ayrshire Single Grain here is from William Grant & Sons Girvan distillery which Brian Kinsman, master blender for William Grant & Sons, says 'reflects the style of our house blends, such as Grants Family Reserve - light, fruity and floral'. It was distilled in 1998 , bottled 2017 just before it turned 19. It is bottled at 43%, which means it has been chill-filtered but is of natural colour and cost the princely sum of £35 from The Whisky Barrel.
﻿
﻿ 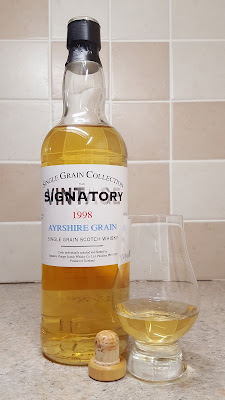 Its certainly not the most complex whisky I have ever tried but my goodness it was easy to drink and very enjoyable. An excellent introductory dram for someone new to whisky and great from warm summer evenings, if such things exist here on the north coast of Ireland. It is considerable value for money too, and 18 year age statement for £35!!! You could buy Haig Club Clubman for £25 but its probably only 3-4 years old and I can't see it offering the pleasure that this Signatory bottling does. Definitely recommended!
﻿