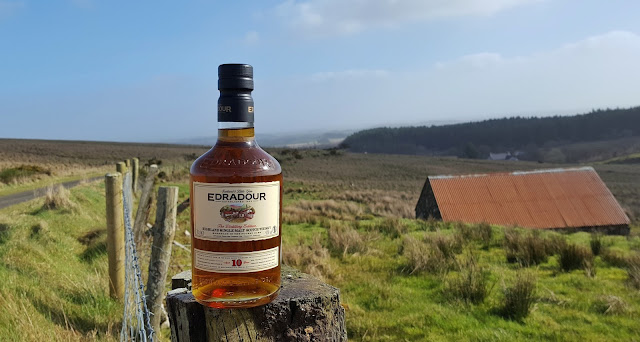 Edradour Distillery really is a blast from the past...and that is a good thing in my opinion. In the age of computer controlled mass production, Edradour are rather traditional -  small scale, hands on and all processes controlled through the watchful eyes of actual human beings....not a computer in sight!


Founded in 1825 as a farmers cooperative Edradour has had a colourful ownership history. From a cooperative it fell into the hands of the New York Mafia, has been owned by Pernod-Ricard but is now back in Scottish hands being owned by Signatory, the independent bottling company based in Pitlochry.
Edradour distillery use Oregon Pine wash backs. It has two stills, a 4200 litre wash still and a 2200 litre spirit still, the latter of which is according to Edradour the 'smallest traditional still in Scotland'.
Edradour are also one of the few distilleries still using worm tubs to condense the alcohol vapour. The distillery produces around 90,000 litres of spirit a year, filling 18 casks per week....so this really is small batch material. The casks are then put to rest in traditional dunnage warehouses.


This expression here is referred to as 'The Distillery Edition'. It is the only expression that the distillery chill-filters but thankfully it is natural colour - no caramel colouring was used to harm this spirit. It is bottles at 40% abv and is aged for a minimum of 10 years in a combination of bourbon and oloroso sherry casks. 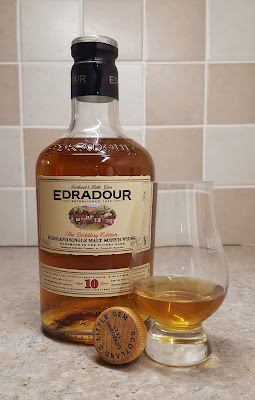 In the mouth it is initially a bit peppery, nutty, creamy and almost chewy. This develops into bitter dark chocolate, leather, sultanas, more pepper, ginger and coffee grounds.

The finish is fairly long. It is oaky, peppery with the notes of dark chocolate, sultanas, almonds. It is dark, intense & robust.

A really interesting experience and a thoroughly enjoyable dram! It does take time to develop though. After my first dram I wasn't blown away by it. I returned a couple of weeks later to find that a little oxidation had worked wonders on it. It had changed from something rather non-descript into a oily, dirty, earthy beast of a dram. It is rather unlike many of the 10 year old aperitif style whiskies you will find sitting on the shelves of your local supermarket. In comparison, this is a dark, dense and a bit challenging type of whisky, definitely a dram to take your time over to be fully rewarded. Essentially it has character! The small stills, hand produced spirit and dunnage warehouse maturation all contribute to this drams unique and engaging nose and taste. In fact it tastes much older than its 10 year age statement. I would recommend this 'little gem' to anyone looking for something a bit different from what is readily available on the supermarket shelves and at £35 a bottle it is well worth the investment.

Signatory also do a 10 year old bottling as part of their un-chill filtered range which is bottled at 46% abv and is again natural colour. It retails for around £45 per bottle and I am intrigued to try it and compare the two, so I can imagine it finding its way into my whisky bunker in the near future!