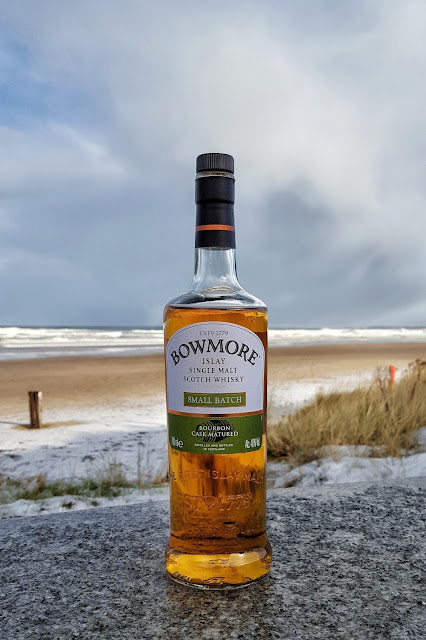 Bowmore is legally Islay's oldest licenced distillery, officially dated as coming into operation in 1779. It is believed however, that the distillery had actually been in operation since 1766 soon after its founder, David Simson arrived on Islay. After a couple of hundred years of independent ownership it was acquired by Suntory Ltd in 1994 and as of 2016 is part of the Beam Suntory Group who also have among their brands Laphroaig, Ardmore, Jim Beam, Kilbeggan, Yamazaki, DYC to name just a few.

The distillery itself lies on the South Eastern shore of Loch Indaal and has an annual capacity of 2 million litres of spirit. The barley is peated at 25 ppm giving the spirit a medium level peatiness, still noticeably peaty but not so in your face compared to Ardbeg, Lagavulin or Laphroaig.  The distillery is also one of a few to use traditional floor malting methods for malting the barley, they used trational wooden washbacks for the fermentation with the wash being distilled in two wash stills and two spirit stills.

My first ever encounter with Bowmore was on holiday in Spain where I purchased a bottle of Bowmore Surf as my apartment nightcap dram. At the time I was almost exclusively drinking Irish whiskies but thought I'd try something different, although I was a little hesitant considering Islay's reputation for producing 'Peat Monnsters'. As it happened I found that I liked the Surf, its gentle peatiness definitely gave me a taste for trying more of the peaty stuff! It was a good introduction to Islay.

So on to the Small Batch. It is a NAS whisky, matured in first-fill and second-fill bourbon cask before being married together is small batches (how small is a small batch? Bowmore neglect to tell us), its bottled at 40% and has e150 caramel coloring added and is also chill filtered - so the unholy trinity of whisky production rears its ugly head here. 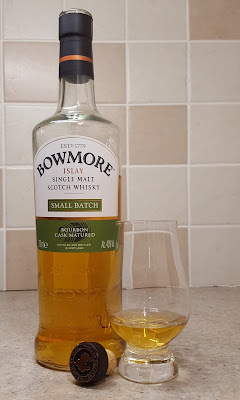 Floral and fruity, pears predominantly leading to a light peat smoke. It is underpinned by something a bit funky and acrid - like hot glue from a glue gun.

This stuff retails at £35 a bottle which puts in the same company as Laphroaig 10 year old, Talisker 10 year old, Caol Ila 12 year old, Highland Park 12 year old, even Bowmore's own 12 year old to name a few other smoky numbers and I'm afraid this doesn't even come close to the aforementioned others in terms of taste. I bought this on offer at £25 and still feel like I've been robbed. I could have bought a bottle and a half of Teachers and had a much more enjoyable experience. In fact at full price you could buy two bottles of Black Bottle and you definitely will have a much more enjoyable experience.

It is products such as this that give NAS whiskies such a bad name. I will in no way ever revisit this expression. The burnt plastic/glue notes run right through the nose, palate and finish and it is hard to pull out any other aromas or flavours other than this. It is just down right disappointing that a distillery of Bowmore's name and reputation would actually bottle rubbish like this and then to sell it as a premium product is really a smack in the face of the consumer. Avoid!
Labels: Bowmore Islay NAS Scotch Single Malt Small Batch Whisky