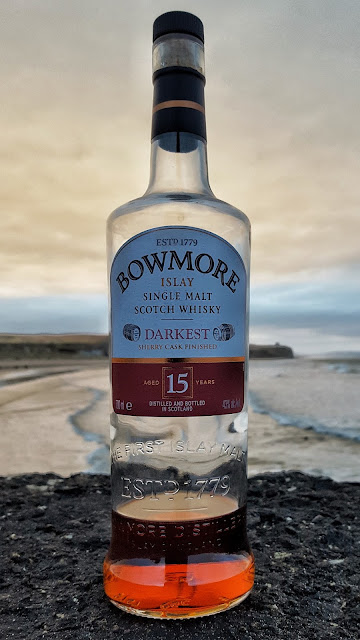 So far, to say that I haven't exactly been blown away by the Bowmore expressions sitting in my whisky cabinet would be a massive understatement.....downright disappointed is what I am! So hopefully the next expression to run the taste test gauntlet will bring me out of the 'funk' that the Small Batch and Black Rock expressions definitely found themselves in! The expression in question is the Bowmore Darkest 15 year old single malt.


Darkest gets its name from the fact that out of the core Bowmore expressions it is the darkest in colour....shame they had to add caramel colouring to achieve the desired effect rather than letting the casks do the work. The spirit has been matured for at least 12 years in ex-bourbon casks before spending the final 3 years of its maturation in ex-oloroso sherry casks. 3 years is a long finishing period by typical standards so hopefully a good dose of sherry influence will be apparent. Due to the use of caramel colouring we cant be sure how much colour is actually derived from the cask combination. It has been chill filtered and bottled at the slightly higher strength of 43% abv.

Copper bronze - a shade darker than the Black Rock but not much in it side by side.

In the mouth it is quite creamy and viscous compared to the previous expressions, helped I'm sure by the extra abv. Raisins, dried apricot, cinnamon, caramel, has a peppery bitterness before the smoke and ash.

Medium, the sweetness initially experinced at the front of the palate quickly evaporates and is subdued by the tannins of the oak and the dryness of the smoke. Not unpleasant but just not what you would initially expect from the nose and the arrival on the palate.

First the good news.....this is a massive improvement over the Small Batch and the Black Rock (although in the case of the Black Rock most other whisky on the planet will be an improvement), The bad news for Bowmore is that I wouldn't rush out and buy this again. It's not that it is a bad whisky, it definitely isn't, it just isn't outstanding and it faces stiff competition in the 'Sweet Peat' market. This is priced at roughly £55-£60 per bottle. At this price you could buy Talisker Distillers Edition, Laphroaig Triple Wood (or for slightly more the excellent PX Cask), the outstanding Ardbeg Uigeadail, or for another £15 you could venture into the brilliant Lagavulin Distillers Edition. Frankly, I would pick any of these ahead of the Darkest.

What I would love to see though is for Bowmore to present their whisky more naturally, dispense of the chill filtration and the caramel colour and let us have the spirit as nature intended. Plus maybe bottle all their whisky at the 46% abv mark and I think they would be on to a winner. Although I'm not currently in a rush to buy another bottle of the Darkest it has at least bought Bowmore a few brownie points in my eyes as a solid, if not outstanding effort.
Labels: 15 year old Bowmore Darkest Islay Scotch Single Malt Whisky