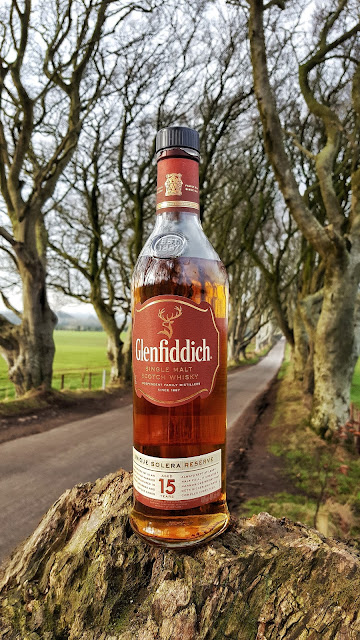 The final review of my Glenfiddich vertical is the 15 year old Solera Reserve expression. This is made up of 15 year old whiskies that have been matured in sherry, bourbon and new oak casks before being married together in Glenfiddichs own Solera Vat, essentially a large oak marrying tun,

So what does the Solera Vat bring to the palate party? Well normally for each run of a whisky outturn the producer would bring together all the appropriate casks for a one-off vatting before having this vatting bottled. The Solera process is slightly different, being modelled on the process Spanish Bodegas use for producing sherry.

Each time Glenfiddich draw off some of the Solera Vatting to be bottled, the Solera Vat is topped up with a new batch of 15 year old malt. According to Glenfiddich themselves the Solera Vat has never been less than half full since it was first used in 1998. So the Solera vatting is made up of the new malt that has been added, with portions that have been in the vat for considerably longer - in theory a small portion of the original vatting should still be present. Thus a Solera is a constant work in progress, continually having its make-up altered by the spirit that is drawn off to be bottled being replaced with new malt. 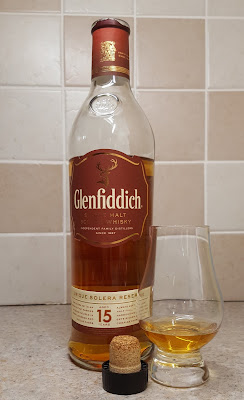 Smooth, consistent and ever so slightly dull. Its not a bad whisky by any stretch of the imagination, its just that it doesn't set fire to your imagination either! Glenfiddich it seems to me has like many of the big players of the single malt world has aimed for consistency of product over wow factor. All three of the expressions reviewed are safe and solid and approachable drams, just imminently forgettable too. At a retail price of around £40 their are more interesting and less generic drams available. Glenfiddich highlights how chill-filtration, colouring and bottling at the legal minimum 40% jut serve to nullify what I would suspect would be a cracking spirit if just left alone.

Of the three core range from Glenfiddich would I be likely to buy them again?....The 14 year old Rich Oak at a push, but I'd certainly be in no hurry to purchase any of these again......I think I'll save my whisky tokens and look elsewhere.