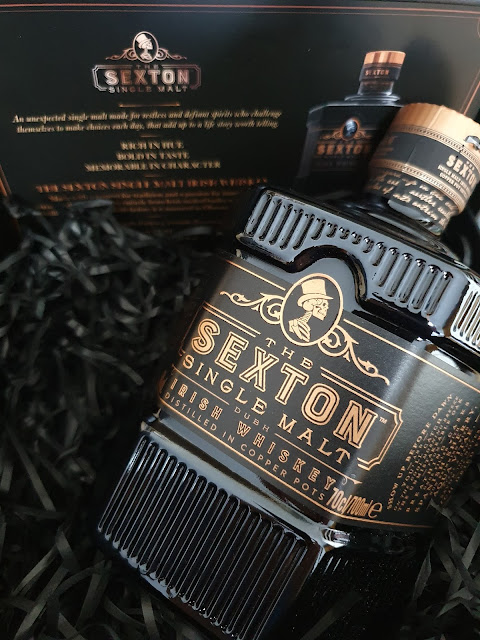 'Sexton' - derived from the Latin word 'sacristanus' meaning 'custodian of sacred objects'. Thus Sexton's were employed in their local parish as custodians of the local church and graveyard and traditionally would have actually also been the local gravedigger. I assume the top hatted skeleton on label is a suitable nod to the old traditions.
The Sexton brand is the brainchild of Alex Thomas based in my local distillery, Bushmills and it was launched around two years ago now. Just like the Red Bush, The Sexton was actually released in the U.S. first before finally being made available for retail here in the U.K. and Ireland in December 2018.
Alex has been at Bushmills since 2004, initially working with Colm Egan in distillation and maturation. This led to Alex becoming fully qualified with a distillation diploma in 2012 before pushing ahead with the task of building The Sexton brand. Speaking to Master of Malt Alex explains why she settled on the name of The Sexton, "I wanted a name that would represent what I do. As a master blender and distiller, I am the caretaker of this amazing whiskey while it’s in the cask. The Sexton is about living life well before you meet the man that lays your body to rest, so that’s why I kind of came round the idea of naming it ‘The Sexton’. I wanted it to be something different, something approachable".
The bottle shape is quite clearly a homage to the famous hexagonal stones of the Giant's Causeway just a stone's throw from the distillery at Bushmills. The black bottle also is a nod to the dark colour imbued on the spirit by the oloroso sherry casks used in the maturation (more on that later).
So what's in the rather fetching looking bottle? Well it's a four year old single malt aged entirely in oloroso sherry casks. This malt is actually distilled in Bushmills Distillery to Alex's specification. But The Sexton is a Proximo Spirits brand (although Proximo are also the parent company of Bushmills). So although it is distilled in Bushmills it isn't a apart of the Bushmills Irish Whiskey family.
This is one of the quirks of Irish whiskey. If we were under Scottish whiskey production rules this wouldn't be legal. Scottish labelling laws simply wouldn't allow a single malt to be produced at a distillery and then put out under a different brand name yet from the same distillery and by the same owners. For example, you couldn't have Diageo producing the Talisker range and then for the craic deciding to put out another Talisker distilled single malt under 'The Skye Whisky' brand.
It's bottled at 40% abv and the colour as you'll see is indeed fairly dark although thanks to European labelling the dreaded e150 caramel has been added and quite lavishly by the looks of it. The bottle retails for around £30 per bottle but can be picked up on offer for £25 on a pretty regular basis.
Full disclosure - this bottle was sent to me by Clearbox Communications. As per usual just cos it's free is no guarantee of glowing reviews. 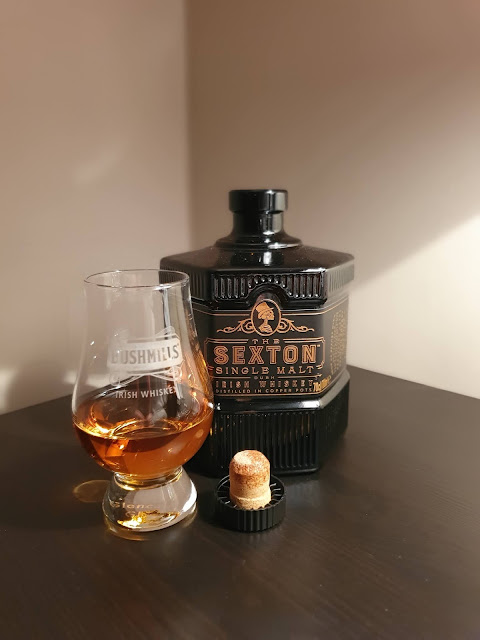 Colour: aged copper
Nose: a huge hit of ripe banana straight out of the glass with some stewed pear too. Honey in abundance too although there is a slight metallic note in the background. Then raisins, clove, allspice and orange marmalade.
Palate: surprisingly oily for 40%. Dark brown sugar, clove studded lemon, cinnamon - yes, essentially this is a hot toddy in a glass flavour profile. Dark chocolate, a little coffee with a black pepper spice kick mid palate.
Finish: pretty short with oak spice and brown sugar notes lingering
Overall: Solid if not spectacular. I mean for a 4 year old whiskey bottled at 40% I don't expect fireworks and so it delivers admirably for what it is. Simple, uncomplicated, it's easily sipped but I think this would come into it's own in cocktails.
Personally though I would still choose Black Bush over this to drink neat. The extra years maturation just give it a touch more complexity and layers.
Labels: Bushmills Single Malt The Sexton Whiskey