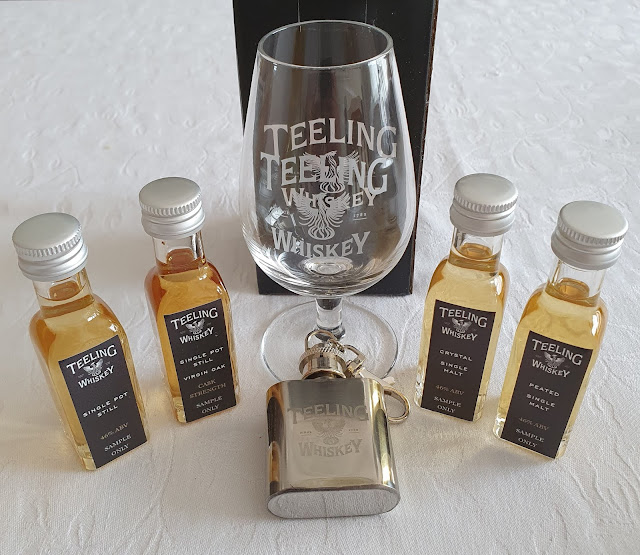 Teeling. A name long synonymous with the revival of Irish whiskey since the arrival of the Cooley Distillery on the scene in 1987 with Mr John Teeling at the helm. Of course Cooley now belongs to Beam Suntory but John has kept himself in the game with the Great Northern Distillery in Dundalk.
Now this love of whiskey creation has continued with John's two sons, Jack & Stephen who opened Teeling Distillery in The Liberties area of Dublin back in 2015. The Teeling brand has really been made off the back of how the Teeling lads have matured and finished sourced stock from Bushmills and Cooley, in some instances with outstanding results.
This business model is nothing new in the Irish market and it helps to fund the end game.....production of your own spirit and finally releasing that to market when mature. Teeling made quite the splash in September in 2018 with the release of their first pot still whiskey and the first pot still whiskey to be distilled in Dublin in well over 40 years. The first 100 bottles sold at auction for charity with bottle no. 1 fetching a mind boggling £10,000. The rest of the batch was released at a more manageable €55 a bottle. Suffice to say i wasn't a fan. You can read my views here.
Time has marched on and things have progressed at Teeling and to showcase this they provided a tasting through the medium of TalkDram tastings to show off four of their wares.
These being a Single Malt made using Crystal malt which was 46%, non chill filtered and fully matured in bourbon casks.
Batch 3 of the Single Pot Still which is triple distilled, 46% and 5 years old. It's components where 50% ex bourbon, 25% virgin oak and 25% sherry casks.
Next up a 5 year old Single Pot Still fully matured in Virgin Oak  and bottled at 64% which I believe is now a distillery exclusive.
Finally we had a peated Single Malt which is a forerunner to the forthcoming Black Pitts release.   it was 46%, peated to 55ppm with white wine yeast used in the fermentation and a combination of ex bourbon and ex sauternes cask maturation. 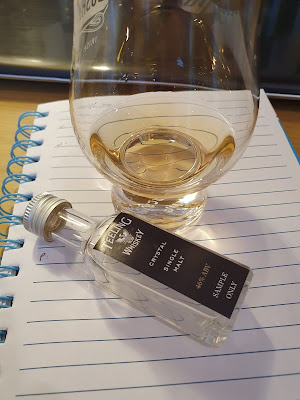 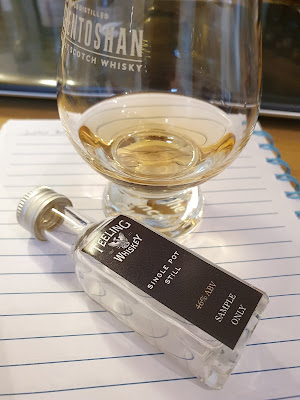 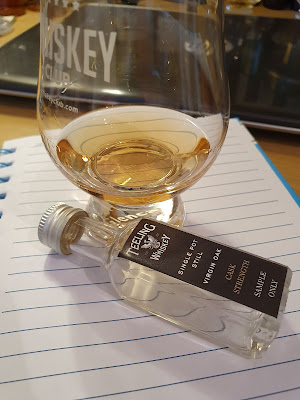 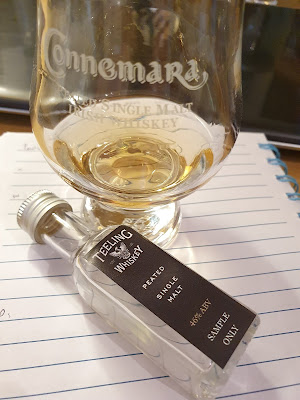 Peated Single Malt 46%
Colour: sauternes
Nose: Coastal bonfire, fresh turf, smoked kippers, fresh tar and lapsang tea. Lemons, apple strudel with fresh cream. Aniseed, ginger and pencil shavings.
Palate: Sweet & creamy. Honey, sweet grapes peach, apricot and orange marmalade. Marzipan, vanilla butter cream and some white pepper. Clove oil, cask char and a delicate kiss of sweet peat.
Finish: decent length retaining a sweet & creamy profile with delicate peat following on.
Conclusions:
Well things definitely have moved on apace at Teeling. The latest version of the Single Pot Still is a massive improvement over the confused mess that was Batch 1. Still not one I'd rush out to buy but as it matures further I can predict good things for it especially if Teeling keep the casks selections more simple.
The Crystal Malt was delicious and harked back to the Bushmills 1608 400th Anniversary release. In fact it made me think once again why so few distilleries have experimented with Crystal malt in their mashbill.
The Virgin Oak SPS was something else....big, aggressive, spicy....almost bourbonesque but with more complexity. I would imagine though that maturing it much longer in virgin oak could lead to too much wood influence. It would be interesting to see if the spirit is big enough to contain it. I'm sure it will make an excellent component for the forthcoming batches of the SPS releases from Teeling.
The final drop was really surprising. Not an absolute peat monster but a total dessert whiskey, in no small part I'm sure, to the use of the sauternes casks in the maturation. If the Black Pitts release follows this then we will be in for a treat.
Labels: Crystal Malt Irish Peated Single Malt Single Pot Still Teeling Virgin Oak Whiskey