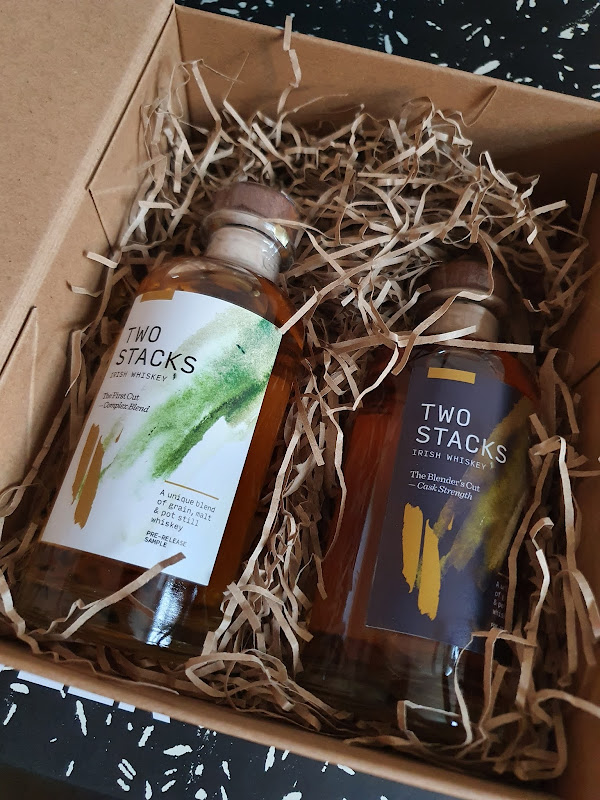 So Belfast Whiskey Week has come and gone. A madcap scheme that somehow came together with some phenomenal efforts from the members of Belfast Whiskey Club and a drive and determination to put together something extraordinary from the slightly unhinged Paul Kane.
For those of you who by now don't know about Belfast Whiskey Week I'll explain what it is. So it launched in 2019 with a series of 18 tastings over 10 days (yes...an Irish week is longer than seven days before you ask) that covered not just Irish whiskey but the whole gammut of whisky from around the world including that unfavourable Scottish stuff from across the Irish Sea.
For 2020 the idea was once again to have a physical festival until our good friend Covid-19 intervened. As part of the physical festival there was an exclusive tasting set of unreleased Irish whiskies that would be available worldwide on the first Sunday of the Festival and would have the tasting streamed online. So with a physical festival unavailable Paul decided to take the whole thing online. By the time the festival started in had grown into a 45 tasting giant with boxes of samples being delivered to California, Canada, Australia and over Europe. On top of that there was Dj's, musicians and comedians too if you got bored of listening to Paul or myself chat about whiskey (If you missed it all the tastings and entertainment will be available via Youtube over the coming weeks.....just look out for the Belfast Whiskey Week channel).
To round off what was an EPIC week of tastings from Killowen (who kicked off the festival) through to Irish Distillers massive portfolio, pre-1980's scotch, pre-1970's Irish to introductions to world whiskies, english and new scottish distillers there was a final exclusive launch from the guys at Two Stacks.
Founded by Shane McCarthy, Liam Brogan and Donal McLynn of Ireland craft Beers they had a very simple plan....to revive the craft of independent bonding and bottling of whiskey that was once common place in Ireland.
As such the guys behind Two Stacks will be sourcing whiskey from around Ireland and producing whiskey that they want to drink but find missing from the Irish market at present but more importantly that we, the whiskey buying public want to experience. Stepping away from the 'smooth' Irish whiskey trope and bringing back robust, flavourful whiskies that we would have commonly found pre-consolidation back in the late 1960's.
They very kindly sent me sample bottles of their first two releases - The First Cut and The Blender's Cut.
Both whiskies share the same components but their abv's are poles apart. The components of the blend are 40% dark grain spirit aged in virgin oak casks, 40% light grain spirit aged in bourbon casks, 8% pot still aged in oloroso sherry butts, 10% double distilled malt aged in bourbon casks and 2% peated malt aged in bourbon casks. Very refreshing to see such detail given in the makeup of the blend. I believe that all the spirit for these blends was sourced at Great Northern Distillery with the bonding and bottling done at Killowen Distillery.
The blends are both non chill filtered and natural colour with the First Cut bottled at 43% abv and priced at around £36 with a limited run of 200 bottles. The Blender's Cut is a mammoth 65.15% abv....the highest strength Irish whiskey available on the market and was a limited run of 222 bottles. All bottles are now sold as far as I'm aware. 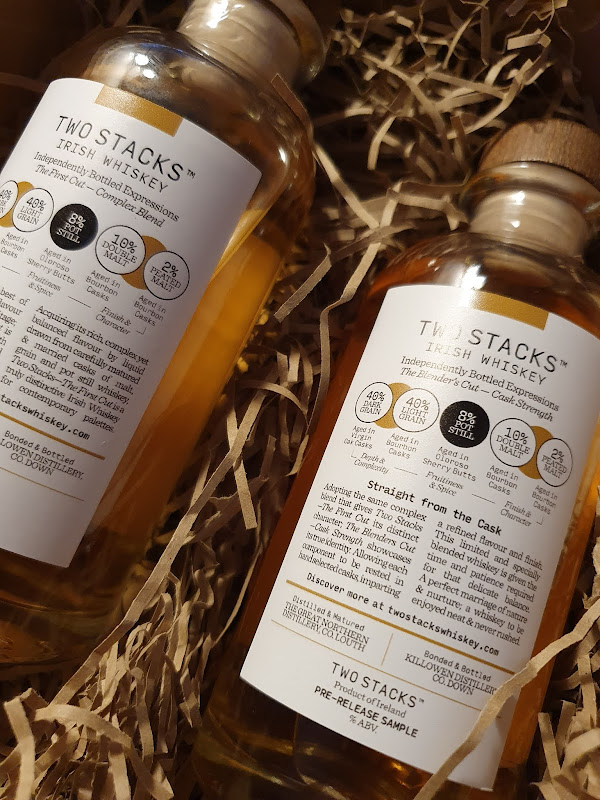 Let's taste then!
The First Cut - 43%
Colour: Straw gold
Nose: An immediate bloom of floral grain notes and virgin oak spiciness greet you. This is followed by vanilla, milky bar, dried grass, cream, some sweet sherry influence and a wisp of cask char.
Palate: A nice mouthfeel to this - creamy & buttery. Vanilla butter cream, caramel, blanched almonds, candied lemon peel, some raisins and then spice - fresh ginger and spicy oak.
Finish: of medium length with cocoa powder and a dab of peat smoke.
The Blender's Cut - 65.15%
Colour: Burnished Gold
Nose: A huge waft of virgin oak spice mixed with toffee, wood sap, ginger and white pepper. Draff and a certain earthiness as well as black tea leaves. Peated spirit more prominent too along with furniture polish,
Water brings more definition to the spice - cinnamon added too with sweet black coffee and sherried notes.
Palate: So oily & viscous - the legs in the glass are ridiculous. Chewy & mouth coating. Loads of burnt sugar, cake batter, praline and sweet black coffee on arrival. Then the spice builds - virgin oak very prominent with fresh ginger and woody clove. Mouth puckering but juicy.
Water brings more sherry influence to proceedings with more dark dried fruit integrated into the palate.
Finish: Long and driven by woody spice and espresso notes
Overall:
An interesting start by the guys at Two Stacks. It's refreshing to see another independent bottler enter the scene who eschew the ethos of transparency much like JJ Corry and W D O'Connell's (well as transparent as the IWA will allow them to be!) Plus the presentation is absolutely superb with cracking label design done by the guys at Studio Stereo in Belfast (also behind the designs for Belfast Whiskey Week).
The First Cut is really solid blend that delivers on it's sweet & spicy flavour profile suggested Two Stacks. I would say this compares favourably with the new formula Silkie Blend and costs around the same too but perhaps doesn't have enough complexity to topple the likes of the Jameson Black Barrel.
The Blender's Cut is unsurprisingly the First Cut on steroids.....a lot of steroids! At over 65% alcohol you would think that it would be totally unapproachable but amazingly it is very drinkable at this strength although water does help tame the alcohol and bring some of the more subtle flavours to the fore past the virgin oak bombardment that greets you at full strength.
I suppose the only real issue I have with it is the price. At the best part of £90 it's about £20 too expensive for me but with the high alcohol content comes high duty and taxes. Again probably it's closest competitor available would be Jameson Black Barrel Cask Strength (A Midleton Distillery or Bow Street exclusive) which is priced at €100. As with the regular Black Barrel, for me it pips the Blender's Cut on complexity and flavour development but the Two Stack's release isn't far off.
Anyway, a fitting end to Belfast Whiskey Week and I look forward to the cask finish expressions that will hopefully be following these releases pretty soon.
Labels: Blend Irish NAS Two Stacks Whiskey