Whisky is an expensive business, especially if you are buying full bottles. I have found myself with an ever expanding collection of open bottles and as such I am finding bottle kills to be a rare occurrence. So in an effort to expand my whisky frontiers without forking out for full bottles I have been adding samples and miniatures to my collection hoping that this would be a more finance savvy way of continuing whisky exploration.


Glengoyne is not a distillery I have had a lot of experience with but have always heard good things about. I bought a bottle of the 21 year old off Amazon for the bottle share club on offer due to the frequent good reviews and reports of it. Then I managed to get a sample of the rather generously priced 25 year old off Master of Malt in a flash sale for £9.41, less than half the normal price. 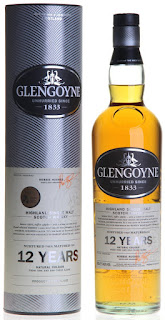 Now that I had samples of the two heavy hitters of the core range I thought it would be worthwhile chasing down the rest of the core range to do a vertical tasting. So I purchased a 5cl miniature pack of the 10, 15 and 18 year old expressions off Amazon and returned to Master of Malt for a sample of the 12 year old.

Further to that I was given a sample of the Cask Strength Batch 6 by my good friend Paddy and also a sample of the most recent edition of the 'Teapot Dram' from fellow Malt writer and friend Justine who also runs www.kaskwhisky.com/, the Leith and Fife Whisky Trails and the Fife Whisky Festival. A busy lady indeed!

The 21, 25, Cask strength and Teapot Dram will form the second part of this vertical tasting.

In part 2 of the vertical I'll give a little more info on the distillery itself. For the sake of brevity here's info on the various expressions in this review.

The 10 year old is a mixture of ex-bourbon and ex-sherry matured spirit, predominantly the ex-bourbon though. It is natural colour although there is no mention of whether chill filtration is used. Bottled at 40% this will set you back around £33 a bottle.

The 12 year old is again a mix of ex-bourbon and ex-sherry with more 1st fill ex-bourbon casks in the make up. Natural colour also, possibly chill filtered and bottled at 43% abv this time. A bottle of this retails around £37 a bottle.

The 15 year old is a mxiture of ex-bourbon, ex-first fill sherry and refill casks which has bottled at 43% abv, is natural colour. It was available around the £50 mark.

The 18 year old has a higher amount of first fill sherry casks in the mix along with bourbon and refill casks. Also bottled at 43% abv and again natural colour but there is a significant jump in price with this retailing around £85 per bottle.

The pictures were nicked off Amazon! 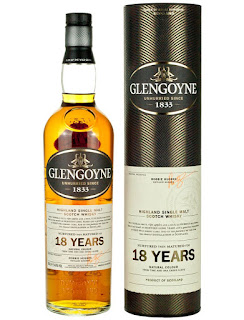 On to the tasting notes then.

The first thing I get is lemon....and lots of it. Then honey, apple and a light maltiness. Mr Frostie ice lollies - very creamy. There is a slight herbal aspect and then fresh pineapple, All in all very clean, fresh and zesty.

Quite a light mouthfeel and in truth quite a light whisky full stop. Orchard fruit - predominantly apple with a touch of peach. Quite creamy. Some highland toffee sweets. The malt from the nose is there with just a touch of spice.

A decent length with the creamy, toffee quality lasting throughout.

There is certainly a bit more alcohol aggression here compared to the 10 year old and it takes a little time for the aromas to come through. Eventually you are rewarded with that lemon note again - this time in a posset. Peach, apricot, vanilla sponge and toffee sauce. Heather honey and malt biscuits before faint sherry notes pull through.

Rather mouth coating. Toffee apples, vanilla cream, honeysuckle and mead. Digestive biscuits mixed with ginger nuts (also biscuits!). Cereal grains with a slight grassy note. It's all rather simple and clean. Finally there is some tannic spice.

Almost hoppy with apples, malt and a light citrus tang.

Orchard fruit abounds on the nose - apples, peach, lemon and orange. Vanilla with toasted oak, Sherry notes are in the background but time brings toffee, chocolate and a hint of coffee grounds.

Zesty and fruity on arrival - lemon zest with baked apples and nectarines. Vanilla custard. Then comes some sherry influence with sultanas, toffee and cinnamon. Malted barley with cocoa too.

The finish again is off a decent length, pleasing warm with stem ginger and a malty, biscuity quality.

Toffee apples and dunnage warehouses. Pineapple, melon, malt and honey. Raisins with allspice. The oak is noticeably more aggressive on this nose. Almonds, new leather and a touch of cherry menthol too.

Fudge is dominant on arrival followed by tropical fruits - pineapple, papaya and melon. Again a creamy and biscuity malt character that then becomes overtaken by a peppery spice that builds with each sip.

My first foray into the core range has been a pretty enjoyable experience I must say with Glengoyne putting out some really solid whiskies.

The 10 year old is a gentle dram but is well made and has just enough going on to be interesting. The 12 year old was very enjoyable too. Simple, clean and fresh and nicely balanced. Both these are priced fairly and offer pretty good value and are a good introduction to the distillery.

The 15 year old is the standout of the bunch. A good level of complexity, flavour development and balance. Sadly though the 15 year is to be taken out of production, if it isn't already, so my advice would be to buy a bottle while you still can.

Of the core range so far the 18 year old is the most disappointing although still a solid whisky, but it doesn't warrant the price increase over the 15. Slightly cask dominated and a little unbalanced compared to the 10, 12 or 15, there are better value options at the price point.