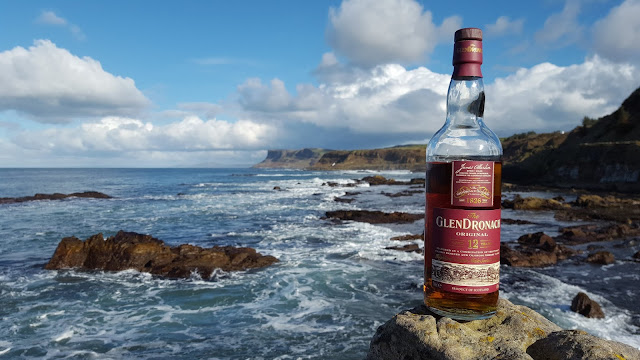 The last review I did, the Benriach 12 year old Sherry Wood, comes from a triumvirate of distilleries that were under the stewardship of Billy Walker. The others in the trio were Glenglassaugh and Glendronach, that is until 2016 when all three were sold to the American giant Brown-Forman and Billy Walker & Co invested their newly acquired gains into Glenallachie.


Of the three Glendronach was synonymous with full sherry maturation and producing high quality spirit that led it to being seen as the 'new' Macallan without the exorbitant prices. In fact the 21 year old Parliament is probably one of the best value whiskies you can buy with such an age statement.

The 12 year old was the entry level dram from the distillery but has been usurped from that position by the 8 year old 'Hielan' expression which veered from the typical full sherry cask maturation and added bourbon casks into the mix. There is also a 'Peated' no age statement expression that takes spirit made with peated barley and adds bourbon cask maturation with a second maturation in oloroso and pedro ximinez casks.

Like the 21 year old Parliament, the 12 year old Original is fully matured in oloroso and pedro ximinez casks, is non chill filtered and natural colour. Whereas the Parliament is bottled at a rather hearty 48% abv the Original is bottled at 43%. Currently the 12 year old Original retails from around £38-£40 per bottle although as I bought mine a while ago I recall it only cost me around £32.

The other thing to bear in mind is the crazy aged stock that went into some of these Glendronach core bottlings....if you bought a bottle of the 12 year old Original that was bottled in 2013 you were in fact getting a dram that had 18 year old whisky as the youngest component...which is explained here. As my bottle is a 2015 bottling the youngest component is 12 years old as stated on the label. 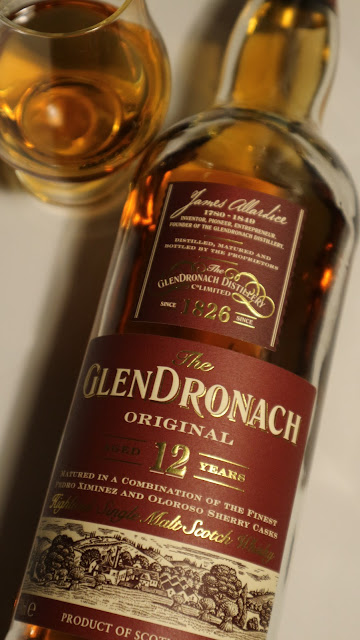 Neat most of the action takes place mid to back palate - a hint of px sweetness but it isn't domineering - raisins, toasted almonds, cinnamon, a little pepper kick and some orange zest. Then clove, dark chocolate and toasted oak again. Water brings a much sweeter arrival along with more spiciness.

Another really solid dram for the money. A good balance between the nose and palate and actually a decent amount of complexity going on here. Certainly a bottle I'll buy again. Saying that I do feel the Benriach 12 Sherrywood offers a little more....I think the extra abv just helps deliver an extra kick of flavour and it definitely has more body. However, for the entry fee neither will disappoint....as long as you like sherry matured whisky!
Labels: 12 year old Glendronach Highland Scotch Single Malt Whisky