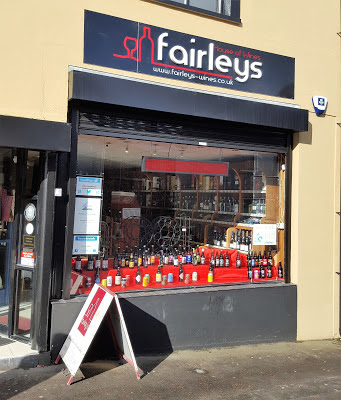 I don't really enjoy drinking whisky alone. That may seem an odd statement for someone who writes a whisky blog, after all doing so requires me to spend time, alone, with whiskies. So why the statement?

I've been thinking about Dave Broom's (whisky aficionado) speech at the opening of Raasay Distillery recently where he quoted Martin Martin who toured Scotland's western isles in the 18th century, reporting on how people lived at the time and crucially how whisky was being drunk. He recounted how people would sit in circles or 'rounds', filling a cup and passing around the circle possibly for 24 or even up to 48 hours....obviously people were made of stern stuff back then. The point being that having a dram back then was not a solitary experience, it was social, it brought people together. Today we still follow that ethos, we buy a 'round', we sit or stand together to enjoy a dram (or imbibement of choice) and most importantly, each others company.

It is at this point that whisky comes alive for me and truly enjoyable - when it is social. There is nothing better than cracking a bottle or three amongst friends and like minded enthusiasts to share, to experience together, to have a bit of banter, to compare thoughts and tasting notes. That's why I would recommend starting your own whisky club amongst friends or attending the odd tasting, to share, to learn and more importantly have the craic. Which brings us nicely to the tasting held at Fairleys on October 13th focusing on Springbank distillery.

The event was about more than whisky though. It was organised to raise money for Marie Curie on behalf of the Andrews family to give something back for the care and support offered by the Marie Curie nurses to Hazel Andrews. To say the event was well supported was an understatement as Fairleys Bar was packed to the rafters. On top of the ticket sales, a raffle and an auction were organised, with the auction offering some superb items to get the locals digging deep in their pockets - Ulster rugby tickets, a 4 person VIP Bushmills Distillery experience, a bottle of Springbank 21 year old and the one that got away, a bottle of Kilkerran 13 year old cask strength with a unique reverse double maturation, 10 years in a port pipe followed by 3 years in a bourbon barrel and one of the first barrels of new make Kilkerran laid down after the distillery began production. After the counting was done it was announced that the event had raised in excess of £3,000 for Marie Curie! It was excellent to see the community spirit in action for a great cause. 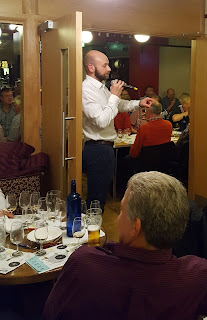 To talk us through the whiskies on offer for the tasting was David Allan of Springbank Distillery themselves. Springbank is still family owned by the Mitchells, the distillery currently headed by Archibald Mitchells great, great grandson, Hedley G. Wright. The only issue is that Mr Wright is single and has no offspring....and is getting on a bit. So it was interesting to from David that Springbank staff certainly do not have to fear for their future in the long term. Essentially the staff currently work at Springbank all have a vote on whether Springbank should be sold out of family ownership after Mr Wright leaves his post. Gladly it is unlikely that this will happen as it has to be a majority vote and the staff do not want to vote themselves out of a job!

Speaking of staffing, Springbank employs 79 people to create 120,000 litres of raw spirit a year. That may seem like a lot of alcohol, but just a few miles away over on Islay, Caol Ila employ 5 people to make 6.5 million litres of raw spirit per year. You may think that this makes Springbank highly inefficient, but just remember that everything from malting, to distillation, to maturation and even to bottling is done by a real human being in Springbank. It truly is handcrafted whisky.

Another interesting crumb of information extolled to us by David was one of the reasons Glengyle Distillery (producers of Kilkerran but owned by the Mitchell family) was resurrected. At one time Campbeltown had 34 operational distilleries in a very small locale and was rightly known as the whisky capital of the world. Through time only two remained, Glen Scotia and Springbank. Seemingly under pressure from the multi-nationals who had no influence in Campbeltown, the Scotch Whisky Association (SWA) informed Springbank and Glen Scotia that Campbeltown may lose its designation as a Scotch whisky region because there were only two working distilleries there. Thankfully Mr Wright came to the rescue. It was pointed out to the SWA that the Lowland Region only had 3 working distilleries, Glenkinchie, Auchentoshun and Bladnoch. Long story short, to keep the designation Mr Wright bought what are the now Glengyle Distillery buildings in November 2000 and on the 7th March 2004 the first spirit was distilled. Good work Mr Wright! 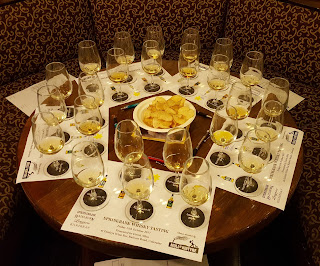 What was on offer for the tasting you may be wondering? The evening started off with Cadenhead's Old Raj Gin, saffron infused and bottled at a hefty 55%.....a rather pleasant palate cleanser to begin proceedings. Whisky wise we were treated to 5 different expressions. Hazelburn 10 year old is triple distilled and unpeated, Springbank 10 year old which is distilled 2.5 times, lightly peated and is 60/40 split of bourbon cask and sherry cask maturation, Springbank 15 which is matured exclusively in sherry casks, Kilkerran 12 which is double distilled, lightly peated and a 70/30 split in bourbon cask and sherry cask maturation and finally Longrow, Springbanks peated whisky. All whisky made by Springbank and Glengyle is natural colour and non-chill filtered and all these particular expressions were bottled at a lovely 46% abv. I have already reviewed the Longrow so no point going over old ground there, I will be reviewing the Kilkerran in a separate piece so for the purposes of this item I will give my thoughts on the Hazelburn and two Springbanks.

Colour:Pinot Grigio
Nose:
Very clean, apples, pears, touch of lemongrass, digestive biscuit, oak char and some coastal sea spray
Palate:
A lovely creamy mouthfeel to this whisky. It is sweet on arrival, vanilla and honey prominent, milk chocolate with a pinch of chilli.
Finish:
Short finish with the green fruits making an appearance, quite buttery and chewy, light oak tannins dry the palate.

Colour:
Corn oil
Nose:
Mineral oil and chalk. Green fruits apparent again with some nectarine & peach before a faint tendril of peat smoke says hello.
Palate:
Oily and chewy in the mouth and like the Hazelburn quite sweet on arrival, sugar syrup, vanilla, pear drops before edging into some cinnamon and pepper with just a hint of salted nuts all wrapped up in a light peat smokiness.
Finish:
Medium finish that is both sweet and salty but never overpowered by the peat.....it lingers like a comforting living room open fire.

Colour:
Light Amber
Nose:
Ah, the sherry influence is very apparent here - sultanas, intense red berries, hazelnuts, crumbled malt biscuit and fudge but with that typical Springbank earthiness and oiliness (in fact I think I managed to pick up wet towel in there too!)
Palate:
Not overtly sweet - autumn spices and fruit cake, nuts, raisins, bread and butter pudding with shavings of dark chocolate followed by cracked pepper, black tea bitterness and peat.
Finish:
Quite a long finish, warming with the sherry, spice and peat all vying for your attention.

A cracking line up of whiskies and the hand crafting of the final product is clearly evident. All the whiskies are full of character and worthy of attention. For me though I really appreciated the Hazelburn and I think it represents great value around the £38 mark. An after dinner dessert whisky if ever there was one. However I would be happy to have any of the above in my whisky cabinet at any time as they all show great balance with varying levels of complexity. More importantly though they were all really enjoyable to drink and that is the most important thing!
Labels: 10 year old 15 year old Fairleys Hazelburn Scotch Single Malt Springbank Whisky