I return to the supermarket aisles once more to again try to find a really good value for money, easy sipper in a time of sky-rocketing prices and often lowering quality. So today it's the turn of Gordon Graham's Black Bottle to run the gambit.
It can be easy to turn up our noses at blends once we spend some time on our whisky journey, but that would be to lose sight of the fact that blends are estimated to make up to 90% of Scotch whisky sales and that is likely true for Ireland as well.
Also true is that some blends are fantastic value for money....Black Bush, Jameson Black Barrel, The Dark Silkie amongst others certainly warrant your attention. On the Scotch side I must admit I'm having trouble thinking of much at similar price points to what I mentioned above that I would whole heartedly recommend. I will keep investigating though and hope I can find something of both value and quality.
Black Bottle originated back in 1879 from Aberdeen tea blenders Charles, David & Gordon Graham and was named so due to it actually being sold in black bottles. This ended in 1914 as the glass was sourced from Germany and so the advent of World War 1 necessitated a switch to green glass bottles.
The original blend was noted for a smoky character that was derived from its used of Aberdeenshire malts in its composition which would have used peated barley from New Pitsligo. It's quality attracted quite a following beyond Aberdeenshire and in 1959 it was bought over by Schenley Industries Inc of USA. Sadly this also led to a considerable drop in quality and Black Bottle became consigned to the ranks of another cheap blend.
In 1995 Highland Distillers acquired the brand and promptly went about recentering the blends recipe around Islay malts. Although the lightly peated Bunnahabhain was at it's heart all Islay's working distilleries were represented and so Black Bottle became very phenolic. This mean't that it gained a good reputation as being a cheap gateway to the thrills of Islay's peat monsters.
In 2013 new owners Burn Stewart (now Distell) moved away from the heavy Islay influence saying that 'Black Bottle had lost itself in Islay' and so returned to the more original characteristics of the blend and also returned the whisky in it's black glass bottle.
I don't have much information on the new blend other than it still uses Bunnahabhain as a component and that the maturation is carried out in re-charred barrels and virgin oak casks.
It cost me £15 on offer in my local Sainsbury's but is normally between £18 & £20 a bottle. It's bottled at 40% and judging by the colour has had the full fake tan treatment. 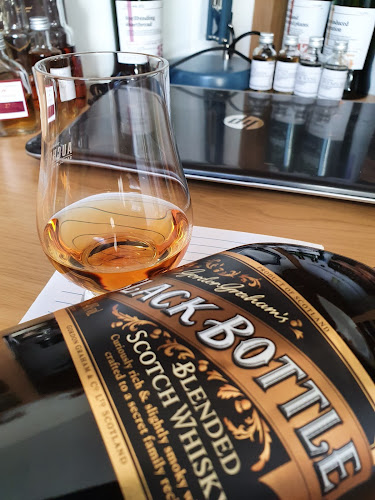 Colour: Finest e150 caramel.....extra toasted
Nose: Something a bit farmyardy here....feinty and grain driven. Toffee, black peppercorns, green apple, creme fraiche, fresh oak and a wisp of smoke. Not huge development here.
Palate: A really thin & watery mouthfeel - no body at all. Fairly sweet on arrival, syrupy. Burnt sugar, orange marmalade, cask char, oak spice & raw ginger. A bitter herbal note to finish almost cough tincture-esque. Very light smoke throughout but a bit artificial.
Finish: Really short, spicy and dry.
Overall: So for £15 I'm not offended but I'm also not overly enthusiastic. At full price the problem it has is the Glen Moray Elgin range which are much, much better and for a few quid more you are into Black Bush range and then it's really a no brainer.
The search continues.
Labels: Black Bottle Blend Scotch Whisky